Ndeye-Marie and the Harvey family

Hear Ndeye-Marie’s story, as told in ‘Until the Daybreak’, played by Misri Dey:

So this is the church of St. Euny. Four thousand miles from my home. Not where I belong, my mother’s village, but where I have lived and made a home. El Cobre. Copper. The town, the mine, named for this metal they polish to a shine like gold, that drew them all to dig down into the earth of Cuba, to rip and rend. To blast through the rock and to mark the skin of my father, my brother, my son with whips and manacles. First it was the Spanish, then men from Cornwall who ran this mine, sold a dream of wealth at the cost of the slaves they make of Africans like us. The Cornish were not so cruel as those who came before and if we feared them, they feared the flies that we just whisked away. Strong men who knew how to hew the rock, were felled by the yellow fever their blood could not fight. By day they laboured and at night some of them drank rum and cried.

And in the middle of it all my little ones, their little ones: some Cornwall-born, some Cuban. Their mother, Mrs Harvey, Jane, poor woman, kept to her house, behind the shutters, as if they could keep out the homesickness with the sunshine and the flies. But the little ones had me. Because their father, Mister John Harvey, was the boss. Not just an engineer but agent for the company. And I was there to clean, and tend, to the house and the Harveys. Sometimes they came to church, the Spanish, named for our Lady: Senora de la Caridad. Lady of love. Then tears would cascade down Mrs Harvey’s pale cheeks.  Convertados we were called: them far from their Cornish chapel, their green lanes and their cool breezes, and me, from a village I can’t recall with a name I cannot say.

Oh but their boys and girls, my boys and girls, they loved the sun and their lives at El Cobre. In the mornings they would run to me as I washed the clothes and pull my skirts and make me dance with them. And we would sing, in words they learned from me.  And the dogs that lazed around the yard and scratched away the flies would join in and we would be  – free.

Mrs Harvey I thought would fade. With every baby, every year, she seemed paler, to have less blood, less substance.  But she endured until she was 51, taken by the cholera that ravages all who crowd too close. That was 1869, the year that El Cobre failed and work stopped. It was as if she was released. By then, two of her little ones, my little ones, both born in Cobre had been sent home, as they said, to Cornwall.

The family thought they would be better – better schooled, better behaved-  but here they are, with St Euny: Julianna dead at 6 and Josiah, who was born on Christmas Day, at 18, almost a man. They say his end was peace and that she faded like a flower. So quiet and peaceful. But our Lady knows, and I know, it was not so. Nor should it be. My Cuban Cornish babies were made to dance and sing, to make a joyful, hopeful sound against the sadness of this world. It is 1886 and they are long gone, but now, at last, there are to be no slaves in Cuba and for the first time in my long life, I am free. And I choose – what a word- to be here with my little ones. Dancing, and singing, and remembering our lives across the sea.

Postscript: Ndeye-marie is an imagined character, based on research into how the Cornish lived in Cuba. The Harvey family were real and Julianna and Joshua are buried in St Euny.

Side by side are the memorials to two of the seven children of mine captain John Harvey and his wife Jane: Julianna (aged 6) and Josiah (aged 18) who were both born in Cuba. They may have been brought home for their education or they could have been sent to Cornwall for safety.
Life for the Cornish families in Cuba was restricted and dangerous. Violence was never far away and disease even closer around the slave-worked mines like El Cobre managed by their father.
The children’s mother died there of cholera in 1869. Julianna and Josiah died in Lanner, far from their family in Cuba. 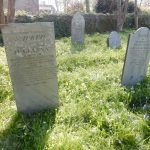 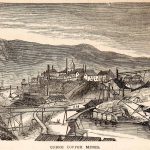 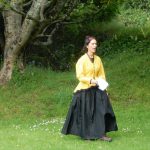 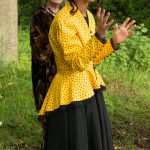 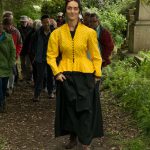