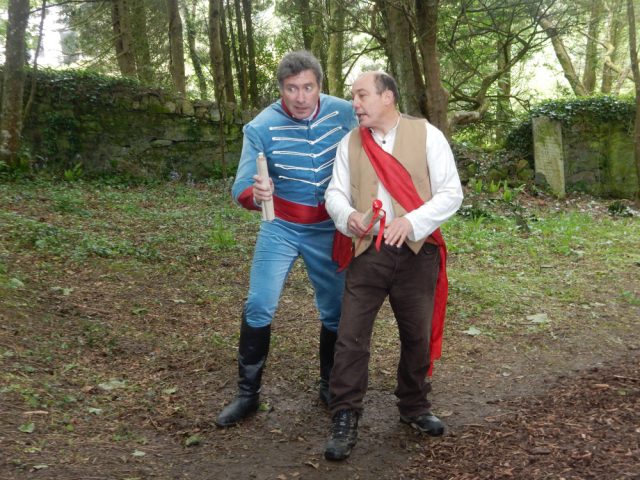 James Williams : James Williams, 22nd Light Dragoons Cavalry, served in Ireland, Egypt, India and several other places in between. Too many to mention. Too dangerous to recall.

Stephen Carkeek: Stephen Carkeek Quarter Master of the Cornwall Fencible Cavalry, served up Helford Creek, down  the Lizard, and any other places where Boney set his sights on. Like Portreath.

Stephen. Not exactly. However we did apprehend a man of a suspicious nature who we presumed to be French.

James: What was he doing?

Stephen. Rambling sir. Along the coast-path. He was shouting orders at the seagulls in a military fashion. He was carrying what looked like a musket.

Stephen: We thought it was a muzzle-loading, smoothbore flintlock musket, but in fact it was a……..

Stephen: It was in-fact a walking stick fashioned to look like a muzzle-loading smoothbore flintlock mus….

Stephen. Also, he spoke in an unknown dialect, remarkably like that of Brittany men…

James. And from where did he hail?

Stephen: Hayle? No not from Hayle. He was from Devon.

James: Devon! Phaw! Tidy your sash man. You know why it’s red? Remind of us blood. Man is made of blood. And it’s not until you face a man in battle, look him  in the eye, then see the colour of his blood, that you remember.

James: That all men’s blood is the same colour, and no man wants to lose more of it than he has too.

Ever seen fear in a man’s eyes Carkeek?

Stephen: Oh yes sir. Cholera epidemic in Redruth. Seen it in a mother’s face. And my Missus when they let the fireworks off on Carn Brea for Queen Vic in ’38. She thought it was the French landing. I told her Boney wasn’t interested in Redruth. She said that if she ever met Napoleon Bonaparte she would give him a piece of her mind….….

James: Yes, yes. We’d better get on with it man.

Stephen: Get on with what sir?

Men of able bodies, all limbs intact , needed for honour and adventure to join the Light Dragoon Cavalry. Successful recruits will receive several Guinea’s and the payment of one shilling per day, minus rations etcetera etcetera. You shall be trained in the use of pistols, sabines, carbines and sabres.

And discipline, which some of you look in dire need of. But! Most of all, you will be honoured in history. Defending our colonies! I myself have seen the Pyramids of Egypt, the shining palaces of India. I have dipped my toe in the Ganges and marvelled at the Taj Mahal. So, me and my fellow officers will be in the Bullers Arms on the morrow to make your mark on the necessary papers, where you shall be plied with rum till you are insensible and know not what you do. Mr Carkeek…

Stephen: Ah yes. Join all ye The Cornwall Fencible Cavalry, a noble endeavour to keep our shores safe from Napoleon and his armies, who could strike at any minute. Any minute. You must be no shorter than five foot four, and none above five feet eight, and able to sit comfortable on a horse. Every recruit will be examined by a surgeon to check for goitres, fleas, lesions and other oozings. Most of you will look very well in the uniform. The enemy may strike at any time.  In between top secret reconnaissances and gathering of highly confidential intelligence on the ground, you shall be directed to keep the peace and squash disturbances and uprisings on the homeland.

You shall be paid…

James: How much will they be paid?

James: How much did you receive?

Stephen.: Three guineas  I think it was.  Which my wife took.

James:  Carkeek! What does that say? My eyesight not so good.

“A soldier lies beneath this sod

Who many fields of battle trod”

He must have been a brave man. A soldier after my own heart.

Stephen. Indeed sir. You have some mud on your shirt. If you don’t mind I could just clean that up a little sir.

Postscript: We don’t know much about Light Dragoon James Williams apart from his family’s pride in his military career. When Quartermaster Carkeek wasn’t defending Redruth from Napoleonic invasion, he was a yeoman farmer who, when he died at the fine age of 81, left all he had to his wife Ann. Redruth never was invaded by the French, but French prisoners of war were marched through the town on their way to detention. 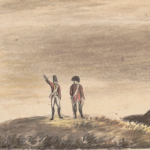 Detail of watercolour “The encampment of the Militia and Fencibles near Eastbourne, circa 1796” showing the Cornish Fencible Encampment [Anne S.K. Brown Military Collection] 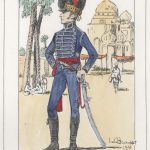 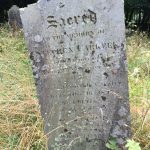 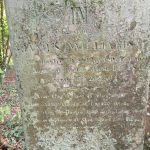 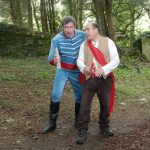